In an interview for Medtech Insight’s Barnaby Pickering Denys Tsvaig talks, how by using DHLT cryptocurrency token DeHealth wants to create a transparent ledger of medical data transfers so patients can see who has their data. 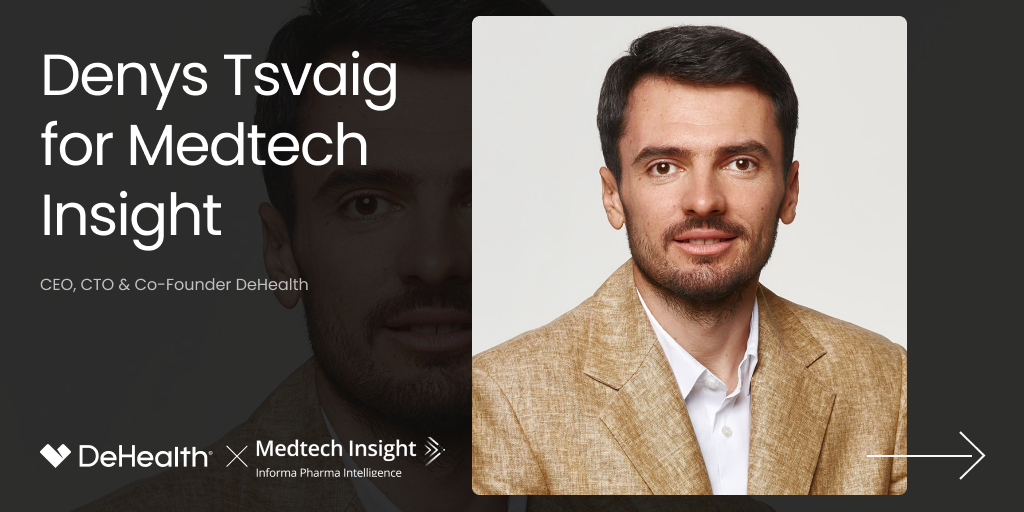 In an interview for Medtech Insight’s Barnaby Pickering Denys Tsvaig talks, how by using DHLT cryptocurrency token DeHealth wants to create a transparent ledger of medical data transfers so patients can see who has their data.

UK-based DeHealth hopes to transform how medical data is stored and shared with its DHLT cryptocurrency token, a tool they claim will enable fast and secure transferring of medical data.

The company is also trying to generate a health-data ecosystem that allows patients to, for the first time, profit from others’ use of their data. To support it work, the company has established R&D centers in the US, New Zealand, Ukraine and Israel.

So far, the company has seen substantial success in its first launch market of Ukraine. Prior to the Russian invasion, more than three million patients had uploaded their health data onto DeHealth’s platform, and more than 650 medical institutions were signed up to its network. Additionally, over 4 million patient appointments have taken place in DeHealth’s smartphone app, and over 30,000 doctors use data from the network.

Explaining the rationale behind DeHealth’s work, its Ukrainian co-founder and CEO Denys Tsvaig told Medtech Insight, “there is so much data worldwide and it has been consolidated by companies into their own repositories. The people who create this data, patients, are deprived of its access — they are no longer the owners, despite being the creators.”

Patients cannot easily find out what the data says about them. Inaccuracies and details patients want to keep private can be bought, sold and transferred without their knowledge. Even GDPR (General Data Protection Regulation), which came into enforcement in June 2018, is not the “fix all” its proponents hope it could be. “If a patient knows somebody holds data on them, they can use a subject access request to see it and have it deleted, but that’s ‘if,’” he said. “There is no way for a patient to track who holds their data at any one time, and also no real way for regulators to ensure that the data has been properly deleted.”

Secondly, transferring data, even when a patient wants to, can be difficult. Moving data between care providers internationally can be extremely difficult, especially when different languages and standards for storing and querying data are necessary. Many times, patients end up being forced to pay again for expensive treatment, simply because previous results are unobtainable.

Additionally, the quality and authenticity of medical data is often questionable. “Data is a source of information for doctors, but nowadays also for machine learning models,” Tsvaig explained. “If you’re building a model, you need high quality, reliable data, but there’s no way to check if the data has been changed at any point prior to getting hold of it.”

Tsvaig recalled a conversation with a major Swiss biopharmaceutical company. “They made a confession. They said they’d spent two years trying to structure the data they already held within their systems and found they were not able to do so properly — even with the best data scientists they could find. DeHealth wants to build solutions to these examples, and ensure people work correctly when handling medical data.”

According to Tsvaig, cryptocurrency could resolve many of these problems because it allows all transactions to be recorded, creating an immutable and decentralized ledger. By assigning DHLT tokens to medical data repositories — ideally at the patient level — the movement of these repositories can be tracked. All data — its contents, location and current ownership — can be verified.

Bitcoin relies on “proof of work.” ”Miners” solve complex algorithmic problems to verify transactions, using up vast amounts of electricity in the process. In contrast, DHLT relies on “proof of stake,” which requires would-be transaction validators to lock up or “stake” a certain number of coins, which are then used to validate transactions. In return, “stakers” receive fractional amounts of the currency in return, giving them a return on their investment — similarly to how a fixed-term bond pays out interest.

This approach lowers the energy requirements of the network, meaning that network speed is less likely to be impacted by power outages. This makes any network much more scalable and faster. One of the major limitations of Bitcoin is that it is incredibly difficult to use it like a standard currency, an issue DHLT is able to sidestep. However, it does open up the possibility of an attack. If one person owns 51% of all the tokens issued, they essentially control the ledger, meaning that they can change the blockchain and thus all previous and future transactions.

This is incredibly unlikely, however, as purchasing 51% of all tokens on a network is likely to cost a lot. Moreover, that 51% of tokens would need to be ‘staked’ and once the attack was started, the owner would lose them. To make any profit, the attacker would need well over 51%. Tsvaig said that DeHealth was aware of this risk and has a “robust” set of measures in place to prevent it.

For Tsvaig, the DHLT token is a means to an end, with DeHealth working towards a reality where patients are in control and compensated for the use of their data. Tsvaig said that the current health care software environment, where software and drug developers use patient data to create valuable products, is unfair. He said that patients who create the data should own it — not just deciding how it is used, but getting paid for it.

Patients that sign up to DeHealth’s platform on its dApp (decentralized app) will be able to upload their personal and lifestyle data, and consent to the sharing of their medical data, getting paid with DHLT tokens depending on how much data is provided.

(The patient does not add any medical data themselves, meaning that trust in its quality is present.)

These tokens can then be exchanged for fiat currencies — dollars, pounds or Euros — but DeHealth is also planning to bring health insurers into the ecosystem so patients will be able to receive discounts towards insurance by selling their medical data.

A Bigger Purpose, And Backing

The past few months have not been kind to the cryptocurrency world. Since November, both Bitcoin and Ethereum — the two currencies with the largest market caps — have lost more than two-thirds of their value. Moreover, the sector has been rocked by allegations of fraud and mismanagement-induced asset freezes.

To both insiders and outsiders, the current climate marks a poor point at which to launch a new cryptocurrency, however Tsvaig is unbothered by these ongoings, claiming that DeHealth “does not see cryptocurrency as our business model.”

The purpose of the DHLT token, he explained, is purely for the verification of transactions of medical data and is better viewed as the foundational element of DeHealth’s wider plans.

Moreover, Tsvaig explained that with other cryptocurrencies like Bitcoin, its value is based purely on its decentralized nature and that “there’s nothing behind it… Whereas medical data will always have value, so DHLT won’t be nearly as volatile.”

Tsvaig hopes for international expansion, with the UK being one of his first targets. “We have been working on accessing the UK health care systems for three years and have a business strategy in place. Naturally, we have to consider GDPR in Europe, and in the US, HIPAA. Our systems are ready for both of these, and we already have partnerships in place with legal entities to help this.”

DHLT will become available for purchase on September, 8, 2022, when it becomes re-listed on various cryptocurrency exchanges. Tsvaig explained that the nature of the relisting was not due to DeHealth’s mistakes, but instead due in part to the Russian invasion of Ukraine.

This means that at any time, would be buyers or sellers of a token can transact, providing liquidity to the market — something that is vital for any token intended to be used like currency. The market maker profits from by taking the spread — the difference — between the two orders.

Unfortunately for DeHealth, however, the market maker they had chosen “entered into conspiracy with a Russian crime group,” with Tsvaig saying that the perpetrator instead tried to force a lack of liquidity in the DHLT token market, something which could sorely impact the currency’s value. DeHealth was blackmailed, an act Tsvaig described as “IT looting.”

In response, the company has been working with Ukraine’s Cyber Police — who continue to be busy due to the war — to press charges on the culprits. “The war has actually been doubled for us,” said Tsvaig. “Luckily, we have been able to sort things out. DeHealth is in a better situation now where it is able to help with charitable efforts in Ukraine while further developing our ecosystem and expanding our community.”